The new logo should be modern and pay homage to the city of Kyoto and/or its cultural legacy.

Provide at least three applications of the logo.
‍
The visual identity must be relevant to the city of Kyoto. The visual identity should be consistent and presented as a finalized preliminary style guide.
Solution
Used the hiragana characters of the museum's nickname "Kyo Haku" to design a logo that encapsulates a 6-pointed lotus and is in a gold gradient, paying homage to the city's emblem and legacy of gold-foiling.

The new logo was applied on business cards, letterheads, brochures, and envelopes.
‍
Patterns found throughout the city, red, and gold were used to influence the final visual identity of the museum's collateral. In terms of typography, typefaces for Japanese and English has been included for domestic and international purposes.
Style Guide PDF 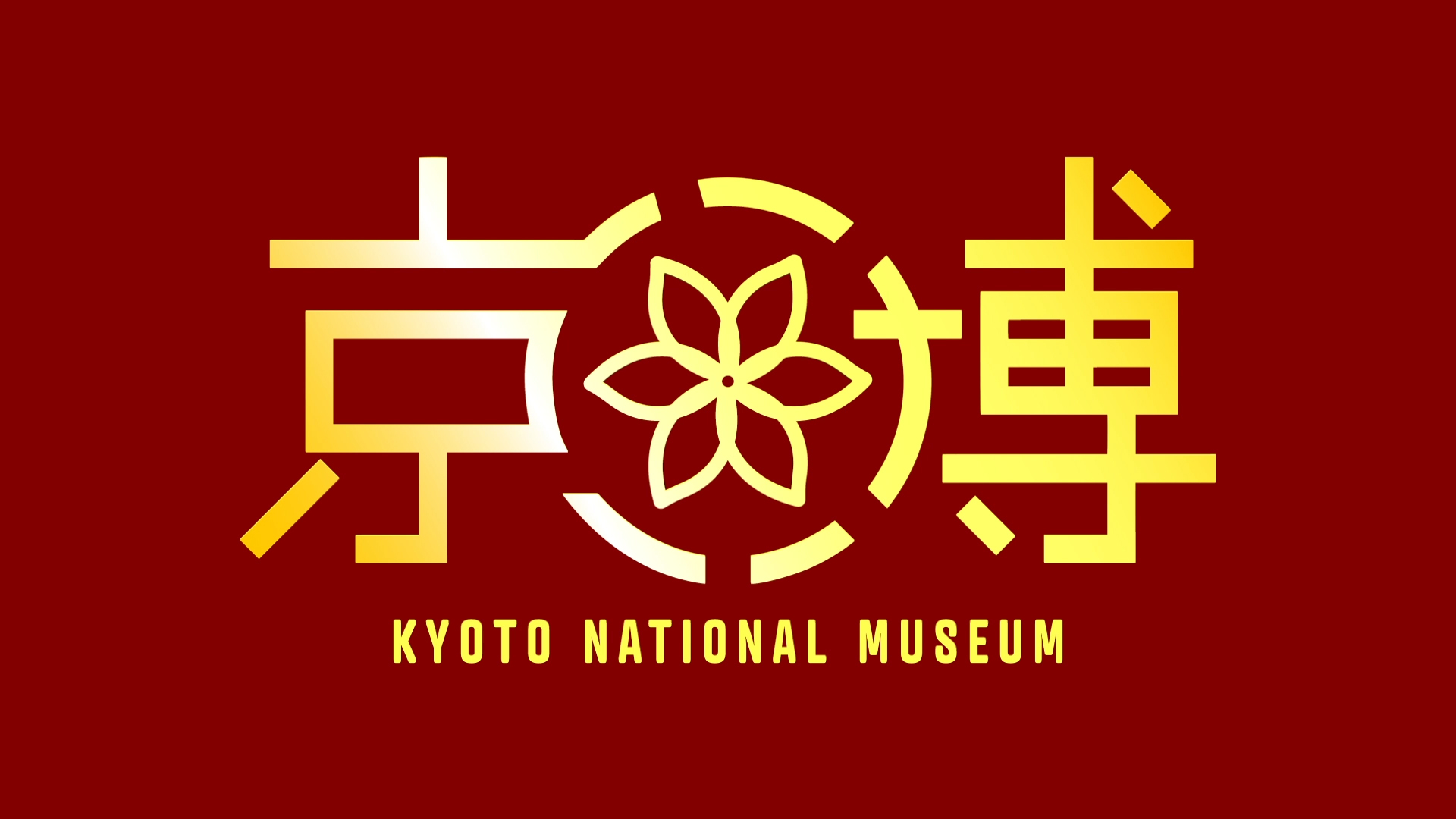 The Logo
The finalized logo took inspiration from Kyoto's city emblem, a geometric interpretation of a lotus. Rather than follow it by example, I wanted to romanticize the idea of gold-foiling, a tradition rooted in Kyoto. Thus I stylized the katakana characters to be sturdy, representing the museum's facade, and the lotus to be organic, representing its longstanding elegance.

When deciding on the logo's structure I focused on how to fluidly integrate "Kyo", "Haku", and the lotus to work as an ensemble rather than separate pieces grouped together. By curving the lines into a circle, I was able to maintain the legibility of the katakana characters while creating a container for the lotus.

Kyoto National Museum is also displayed in English at the bottom for international visitors.

Three logos were prepared to suit any sized surface: standard, horizontal, and compressed.
The Animated Logo
As an added extension of the logo, I created a logo animation for the new logo; with the intention for it being used on their YouTube page or as a promotional video buffer. 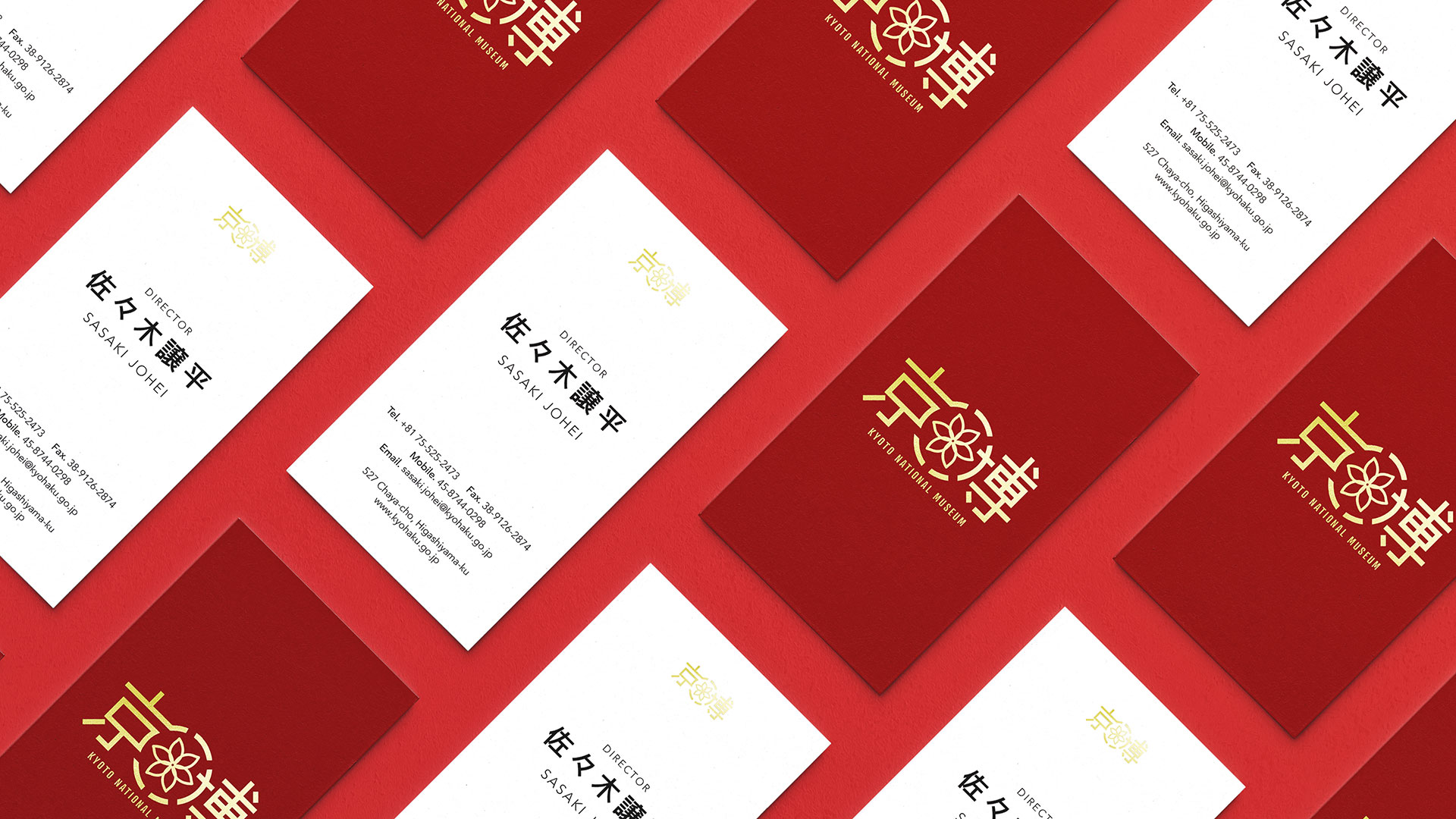 The Business Card
The business card is printed on #100 matte card stock in a vertical position.

On the back, contact information is typed in English and Japanese katakana. On the front, the logo is gold foiled onto the museum's signature red. The logo is gold-foiled rather than gold gradient printed, as in the print collateral, to exude a sense of refinefent.

The business card has Japanese Katakana and English integrated into its design for the purpose of doing business internationally. 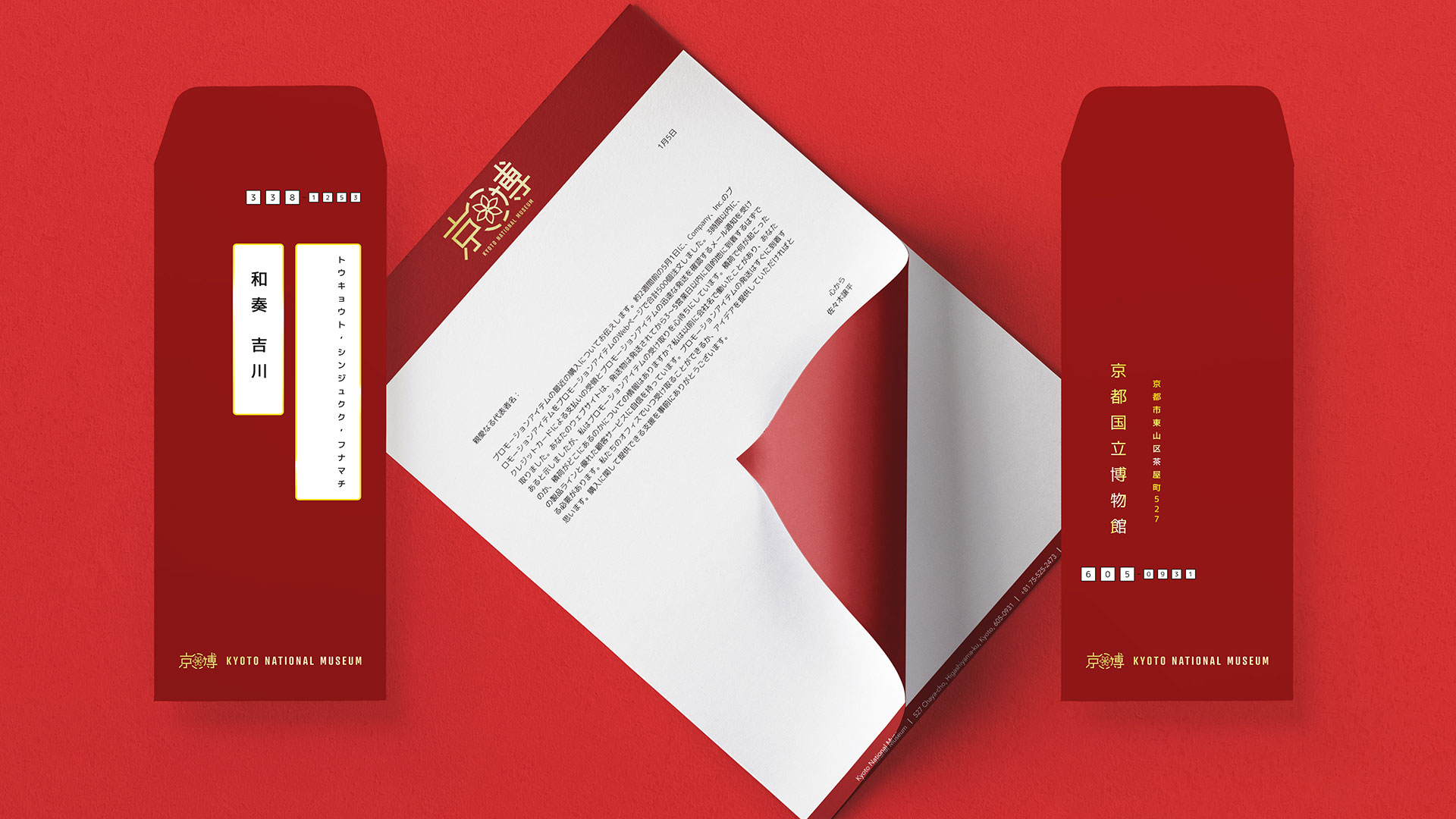 The Stationery
The letterhead is printed on #32 text paper and is kept simple with the logo placed at the top and contact information at the bottom. The backside of the stationery is dyed in the identity's signature red.

Instead of a standard A4 envelope used in Western countries, a vertical A2 is used to follow the Japanese mail courrier standards, along with it's information printed in the appropriate areas.

The horizontal logo is used at the bottom of the envelope on both sides and the envelope is dyed in the identity's signature red. 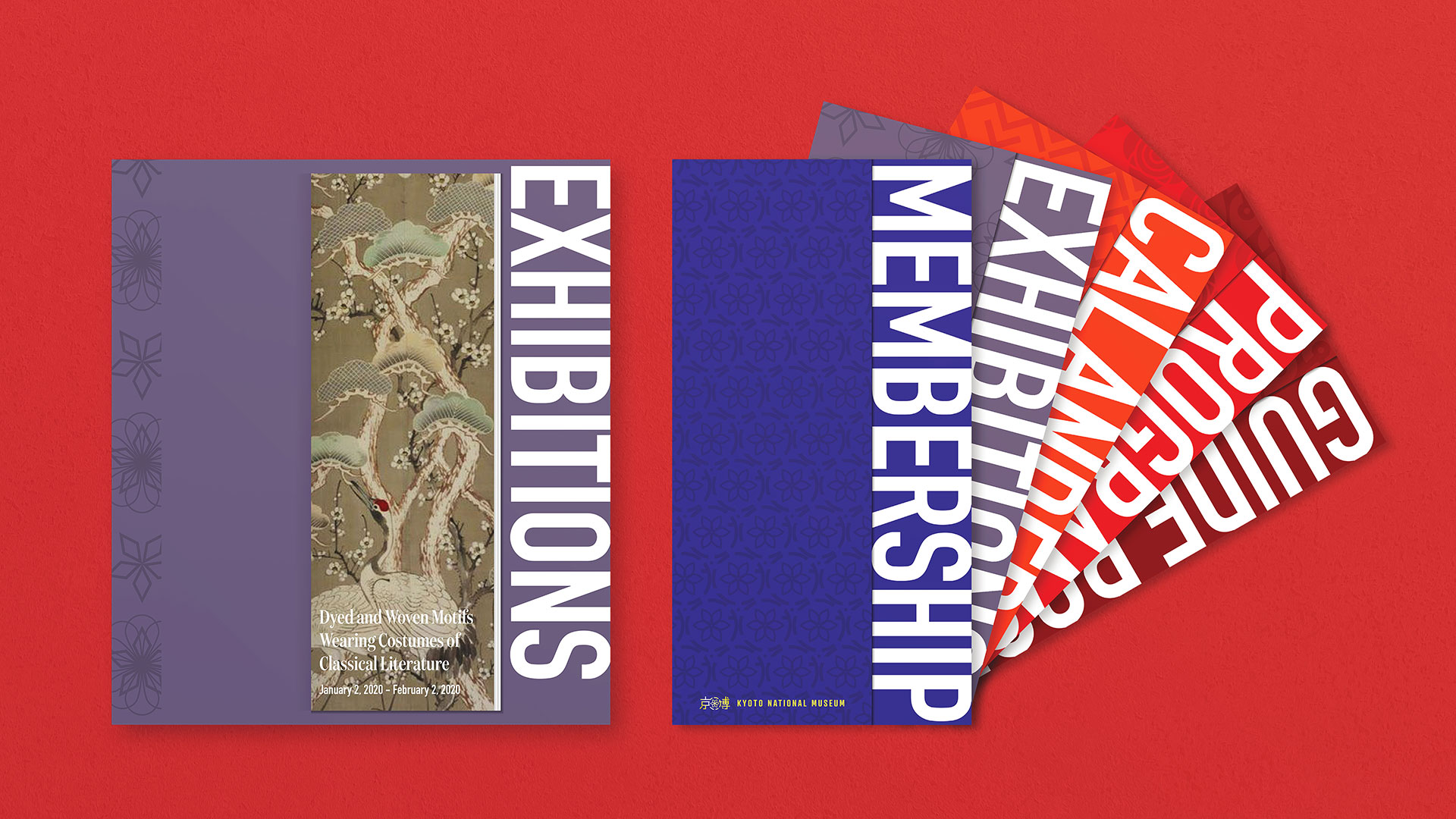 The Brochures
Unlike the business cards, letterheads, and envelopes, the brochures depart from the red and gold combination and adopt different colored patterns.

These patterns were inspired by kimono textiles and use objects and organisms originating in Kyoto like koi, tatami mats, loti, sakura, and chrysanthemums.

The colors used also complement the red and gold combo of the museum's new logo.

The logo on the brochures, similar to the print collateral, are gold gradient printed rather than gold-foiled because of its disposable nature. 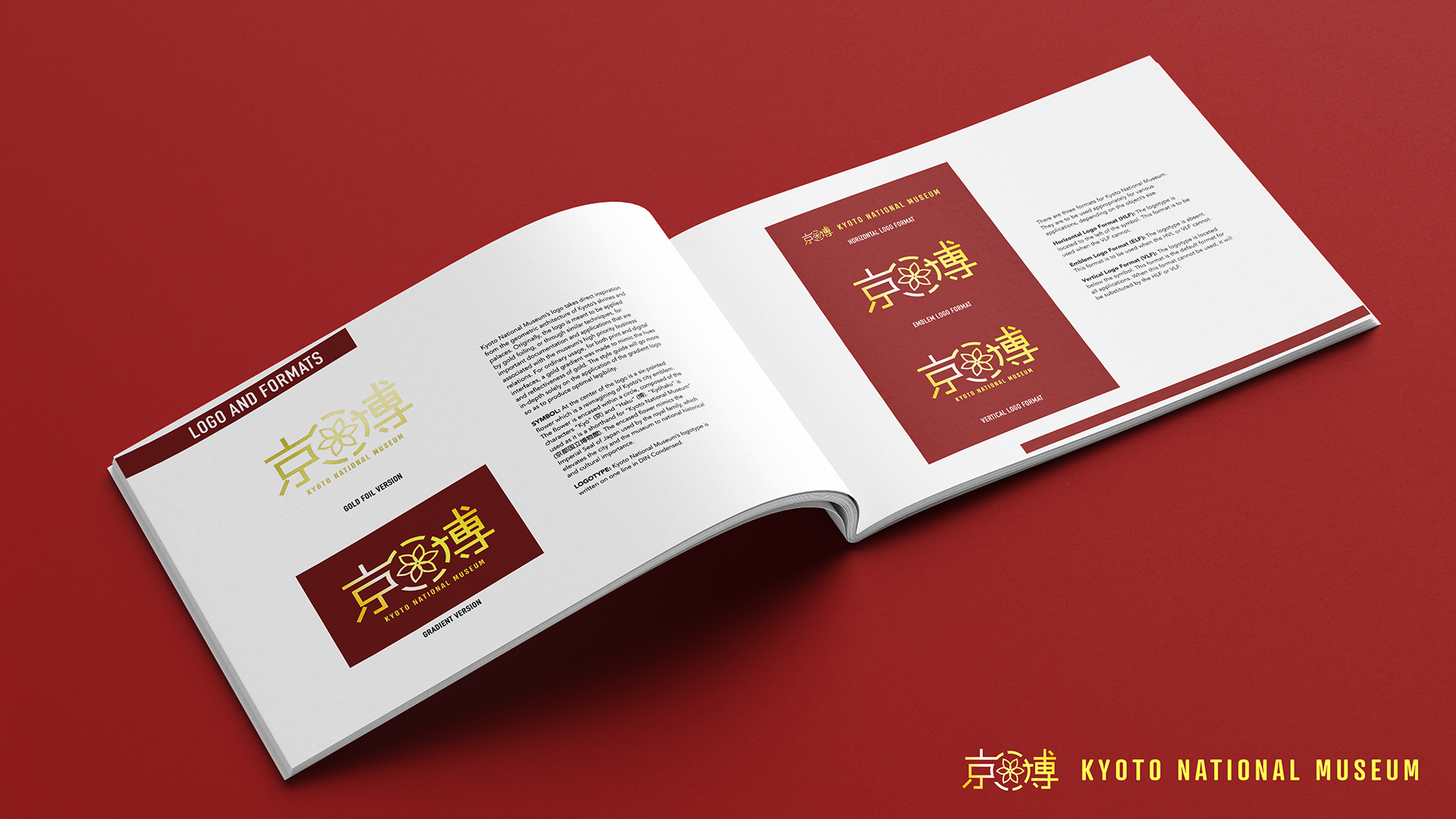 The Style Guide
Logo best uses, color palettes, typography, and applications of the logo on the collateral were compressed into a style guide, detailing best practices on how to correctly represent the brand that is Kyoto National Museum.

A copy of the style guide can be found by clicking the link in the "Solution" section.
Return to Portfolio